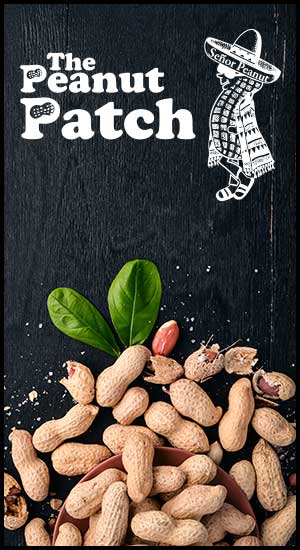 Our goal at The Peanut Patch is to provide a quality fresh product in a Christian atmosphere of kindness, honesty, and friendliness. We strive to keep our products fresh. The items that are made in the store are made from the finest products with lots of TLC. We want our customers to go away saying they had a wonderful experience while in our store and were treated like family while dealing with our employees.

Learn about all our products

The Peanut Patch has come a long way from it’s humble beginnings. It all started after World War II when Gerry and Franny Didier homesteaded some property on the Yuma Mesa. The soil on the mesa is much sandier than in the surrounding valleys, and proved to be less than suitable for traditional crops of cotton, grains, and produce. The growers searched for crops that would be well suited for these challenging conditions. Citrus grown in the warmth of Arizona sunshine became a great recourse and today still represents a vital role in the agricultural economy of the Yuma Mesa. In the fifties, Gerry began working with peanuts and found the crop that would become his life’s passion.

In 1977, Gerry and Franny opened The Peanut Patch on their original homestead. Twelve years later the Pratts and the Honeycutts grew their first peanuts and delivered them to The Peanut Patch. Gerry was impressed with the quality and encouraged the young growers to expand their production with a commitment to sell his quota if they could duplicate the quality that he insisted on. Gerry surmised with a quality grower in his pocket, he could concentrate on expanding his retail operation.

As 1990 rolled around, everything looked like it was going according to plan. the peanut crop was excellent; Gerry’s protégés performed beyond expectations and the year ended with a handshake that would make the Pratts and the Honeycutts the primary producer of The Peanut Patch peanuts. The spring brought tragedy when the Didier family discovered that Gerry had inoperable cancer. Upon Gerry’s untimely passing the family was faced with a dilemma as to who would carry on The Peanut Patch Dream. The decision was made to sell the business to someone who could carry on the vision.

The natural choice for them was Gerry’s best peanut growers. By the time the store opened in 1991, the Pratts and the Honeycutts would be the new owners. In the summer of 1997 they decided to move on to new horizons, which left The Peanut Patch without an owner. The George family decided to become a part of Gerry’s original dream and re-opened the store on November 20, 1997. The store has changed a great deal over the years as it has expanded to meet the needs of our patrons, but the tradition has been a commitment to the highest quality products available.